skip to main | skip to sidebar

It's been a long time since I've posted.  It's been a long time since I've painted.  I'm working on both.  I'm also going to start a blog of my new journey.  I was diagnosed with type 2 diabetes.  At first, I thought it was practically a death sentence but now, I've decided to turn it around and use it as a tool to get back to healthy.  (Even though I'll never 'lose' the diabetes, I'll 'use' it instead.)

Sorry for all the silence.  Part of my "getting back to healthy" includes lots of painting because while painting, I'm at peace and relaxed.  Some people like to meditate, I like to paint.

Latest update on the Poppies 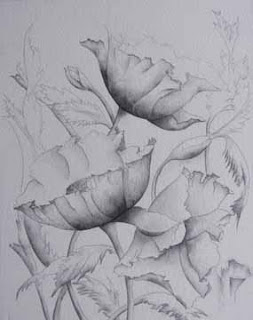 Here's the latest that I've said (a few times) that I would post.  It's fun working with just one colour!  (But it's also going to be fun when I get into the glazing of colour.) 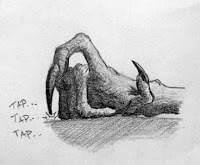 My son, Zach, is always saying he "can't draw very good".  Yesterday, I found this 'phone doodle on the desk.  Correct me if I'm wrong, but anyone who can doodle out this in a few minutes while waiting 'on hold' on the phone definitely CAN draw!  I think it's amazing!

And I'm not saying this because I'm biased, even though I might be a bit, I'm saying it because I've seen his other artwork as well as this one. 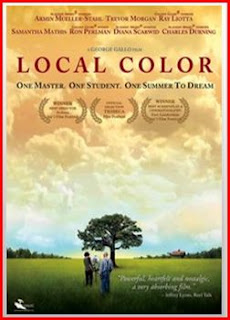 I watched a really good movie last night on Netflix.  It's not often you get a well-done, realistic movie about artists, written by an actual artist.  I loved it, I loved the dialogue about art, I even learned things from Nicoli.

Here's the "official" description taken from the Netflix site:  "A struggling 18-year-old art student meets a well-known painter many years his senior whose life has been consumed by alcoholism, and the two forge a friendship that helps both of them to overcome their pain and look toward their dreams. The young man really wants to learn to approach his painting like the master, and the old master wants just as much to be able to revisit the world through the rose-colored lenses of youth."

I watched it on my computer, here in my studio and worked at the poppy grisaille at the same time.  Talk about multi-tasking!  It's coming along though - almost looks like a black and white painting!  I'll post it later .....

I keep looking at the title of this post and want so badly to put the "u" in the word, Color!  I have a book by Jeanne Dobie called "Making Color Sing" and I actually took a black marker and put the "u" in the title on the cover.  ROTFLOL!  Spelling habits never die!
Posted by Deb Léger at 7:30 a.m. 6 comments

I love that Blogger has the options of pages here in Blogger-Land!  I was getting pretty discouraged with my old website.  As a way of raising prices, different services which I had originally been receiving free now had an additional price tag on them.  New subscribers were still able to get those services free and their overall rate was so much cheaper.  You know those Ally commercials on tv?  I quoted them in my cancellation letter (i.e. they should be taking care of their existing customers while wooing new ones) but they didn't even respond to my comments, except to tell me how to remove my credit card number from the profile.  Guess they have too many customers.  Now, they have one less.  Egg management fees were getting too high and the "new-er" customers were getting all the ice cream.

So, I have played around in here and made this my website.  Maybe until I do more research and find a new webhosting company or maybe for longer if I like this.  But at least it shows my "stuff".  You can see the page links just under my banner.

Now, back to the grisaille I'm working at on the poppies.  I'll post it later.
Posted by Deb Léger at 8:54 a.m. 6 comments

The pears are finished! 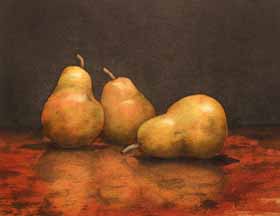 And if two posts aren't enough after such a drought, here's another!
The grisaille pears are finished.  I finished the front stem and the reflection area of the pears.  I like how it turned out and am really happy with it.  The last poppy painting is going to be in this style.
It's also on a 1/4 sheet of Arches 300 lb cold pressed paper.  And it's all in traditional watercolour paint.  I love how it looks like an oil painting, though.  :-)  I'm also pretty proud of that black background!  It's several washes of WN blue black and was done without any masking around the pears at all. 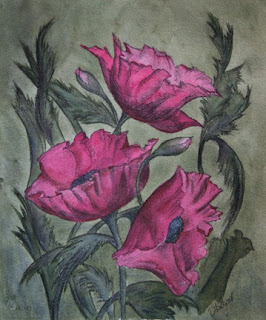 The plan was to quickly draw out four paintings, all the same and do them four different ways.  All are on 1/4 sheet 300 lb arches cp.  The plan was put into effect to get me back into drawing fast 'cause I was starting to get so panicky over not painting for so long that I was thinking maybe I'd forgotten how to paint.

The first was to be a taped painting a la Sandy Maudlin, to look like her totally awesome batiques.  Didn't work.  I'm not even posting what I did on it here because it is so totally awful!  Taping isn't as easy as it sounds.

The second was drawn out in charcoal, then painted over with watercolour.  I like the extra shading you get.  The first one posted here (should be to the left if blogger lays it out properly) is it.  Nothing fancy - just fast paintings meant to get me back into it. 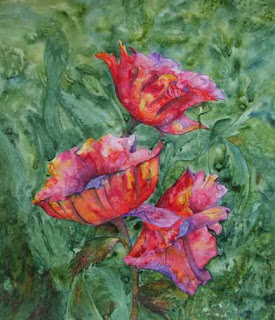 This one, the third, was started out in Nick Simmons' acrylic-watercolour style a while back and set aside unfinished.  It's the drawing I used as a base for the four of them.  I love how the background turned out and I love the colours in the flowers.  Very unrealistic but fun to paint.  The shading on the flowers was done in regular watercolour.  The nice thing about using acrylics underneath is that they never shift or lift later on when painting over them.

Deb Léger
Eastern Ontario, Canada
I'm an artist from Eastern Ontario specializing in, but not limited to, watercolour. Comments are welcomed here! Every time I sit down to paint, I lose myself in the act. May it always be so. 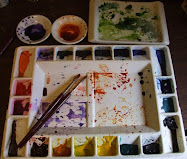 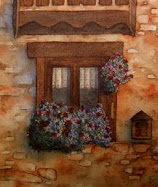 Make sure you watch their video...

Artist Blogs and Sites of Interest